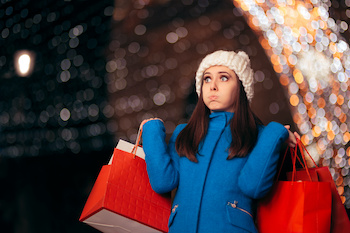 Are UK Consumers Going to Shop More Sustainably in 2020?

VoucherShares.co.uk commissioned the following research in November 2019. Over 1500 consumers based from around the UK were polled to understand their spending habits particularly in the lead up to and during Christmas.

Do UK Consumers Care About the Impact of Fast Fashion? The purpose of the research was to find out how many people buy a Christmas outfit and how often they wear it. And to understand how many people are considering the impact of fast fashion on the environment and ultimately are UK consumers shopping more sustainably in 2020?

How often do UK consumers buy a new outfit for the Christmas party season?

How often do UK consumers wear outfits and dresses?

When asked “Is it likely you will wear a new outfit/dress bought for the party season just once?” 51% responded ‘yes’.

How often do UK consumers buy a new dress/outfit for a big event, like a Christmas party or wedding?

71% of females always buy a new dress/ outfit for a big event like a Christmas party or wedding.

How many times do women wear dresses purchased for a special event?

When asked how many times they would end up wearing a dress bought for a special event, British females said only about 4 times.

Do women get excited buying a new dress?

27% of women said they get genuinely excited choosing a new dress for the festive season.

Are UK consumers going to shop more sustainably in 2020?

In 2020 25% of UK consumers said they would shop more sustainably.

Why do people buy fast fashion?

22% of UK consumers interviewed said they buy fast fashion to put them in a good mood.

Do UK consumers buy clothes similar to the ones they already own?

21% of consumers interviewed buy clothes that look identical to the ones they have already got.

19% of consumers feel guilty about the amount of clothes they buy.

Do women care if they wore the same dress as someone else?

19% of women said they would be mortified if someone wore the same dress as them.

How important is it to UK consumers to look the best dressed at a party?

12% said it’s their mission to always look the best dressed at a party.

Do UK consumers feel offended if they don’t get complimented on how they look at a party?

8% of people get offended if they don’t get complimented on how good they look at a party.

Do UK consumers wear the same dress to a Christmas party?

7% of people said they wouldn’t be caught dead wearing an old dress to the Christmas party.

How much do UK consumers spend on pampering at Christmas?

When asked how much they spend on pampering on anything from manicures, hair, tans and waxing, the average female Brit will spend £89.16 pampering themselves in the run up to their Christmas party, this is slightly higher for ages 16-29 at £105.33.

Do UK consumers feel like they have NOTHING to wear, despite having a wardrobe crammed with clothes?

72% of UK consumers feel like they have nothing to wear despite their wardrobe being crammed with clothes.

How much money do UK consumers spend on a new outfit or dress for a Christmas party?

What is the best part of a Christmas party?

How many clothes do UK consumers buy for a party?

What do UK consumers do with clothes they don’t want?

When asked if they think it’s a pain to return items they have bought online 81% said yes.

Do UK consumers wear an outfit more than once to a special event?

55% of UK consumers feel guilty for buying fast fashion that’s cheap and cheerful but that they hardly wear.

Consumer Attitude Towards Sustainability in 2020

The news has been filled with the detrimental affects of fast fashion and it appears more people are sitting up and taking notice. However, the reality is there isn’t a huge enough shift in consumer spending habits and attitudes towards sustainability with only 55% feeling guilty for buying fast fashion and 11% of people actually throwing clothes away. Furthermore, when asked how many consumers would shop more sustainably in 2020 only 25% of people said they would.

With the majority of people still buying new outfits, despite a wardrobe full of clothes, and refusing to wear the same outfit twice we clearly have a long way to go to make significant enough changes. To positively impact the huge impact fashion and other spending habits are having on the environment we still have a long way to go.

Today (29th November), is the UKs biggest annual shopping event and with it comes a surprise, a lesser known event called Green Friday. Until this year Black Friday's eco counterpart Green Friday has gone widely unrecognised but is gathering much momentum. >>> .

This year Black Friday lands on Friday the 29th of November amid heightened worry and debate over the environmental impact of shopping. Black Friday is the ultimate emblem of mass consumerism at its finest, bang in the middle of Cyber Week, followed immediately by Cyber Monday, Christmas then January sales. BOOM! >>> .

How to deal with the winter weather

With the nights getting longer and darker, it can be difficult adjusting to not seeing the sun daily. Every year it’s the same story, despite knowing how cold it can get, we are still shocked when it finally happens.