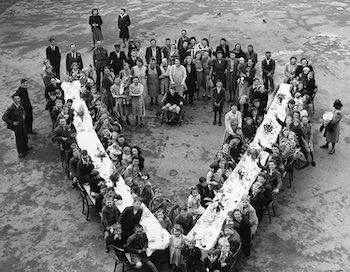 Victory Day (VE Day) memories of Verity Donovan, who was only 8 y o at the time.

A few weeks before VE Day we knew the end was in sight, even though we lived miles form London. There was an excitement in the air, and it wasn’t just because spring had arrived. People had a spring in their step and a new optimism seems to have taken over from the dark despair so many had felt for so many years. My father, in the last few months, after so many years at sea serving on destroyers and submarines, had become provost marshal in Dover. He had adopted a homeless dog from the ruins of that town, after finding she was pregnant, asked my mother, my sister and I to travel to Dover to pick her up and bring her back to Yorkshire.

Looking back, it seemed a tremendous request, but my mother was only too willing to go as she had only seen my father on three occasions in five years! After travelling by train to London, we found that Hitler had given us a final blow in the form of a rocket, which had exploded outside the city. We ended up that night in an underground station surrounded by a few Londoners so used to the Blitz that a random rocket didn’t faze them at all.

Once in Dover we could see the devastation. Piles of rubble everywhere and even a burnt out car half way some steps. Living in an area where we had never heard or seen a bomb, it was a real eye opener. I remember we stayed that night in Dover castle, then next day moved into digs in Ramsgate, a seaside town further up the coast. A week later we were told that the war in Europe was over, but we children were more interested in the street party that followed. Long tables ran along the road and we were soon landed with sandwiches, jellies and cakes made by all the neighbours, using the precious coupons from their ration books. The party was followed by a parade through Dover with many of the armed forces available marching alone, watched by thousands of people. We were at the front of the crowd, and felt proud when we saw our father standing to attention and lining the route wearing his Naval uniform.

Back home in Yorkshire

Back home again in Yorkshire, the festivities continued, and my sister and I were soon roped in to take place in a Victory concert at the village church hall. We both felt very proud in our white dresses with large red Vs sewn in the front, I remember singing Alice Blue Gown before an audience happy to watch anything now the war was over. But of course, the war wasn’t really over but us children did not know about Japan. That was another story for a later date when we learnt that one of my father’s brothers, Uncle Jack, had survived after being a Japanese prisoner of war. Luckily, all my uncles, two in the Army, one in the Marines, and my father, survived, as well, as my mother’s younger brother who served in RAF. How lucky was that?

As an experienced journalist, Verity Donovan has mastered the art of clear, succinct writing and captures the reader's interest from the very first line. Some stories are set in the author's beloved Yorkshire during the thirties and the Second World War. Dementia, old age and homosexuality all get an airing, interspersed with a light-hearted look at personalities as a whole. Three of the stories have been read out on the BBC.

Exclusive Extra 5% off everything

Up to 50% OFF Selected Styles

Top Games During Lockdown! Anyone for a Zoom and Linkee?

Unless you’re a key worker, chances are you’ve swapped nights out for a Zoom with most probably a quiz or a game! Playing a game or doing a quiz is a great way to guarantee fun and amusement while ensuring the things are kept in order, civilised and the chatterboxes amongst us kept under control. >>>

National Gardening Week – Grow Your Own

National Gardening Week 2020 runs from April 27th through to May 3rd and is organised by the Royal Horticultural Society (RHS). April and May are prime months for getting your garden ready for the lovely summer season. My own approach to gardening can be summarised in one statement: I like my garden to be tasty, yet pleasant on the eye >>>

The Coronavirus has forced us all to sit up and make immediate changes to our lives to save them. These changes have been drastic and we are in traumatic times.

In contrast the impact on the environment has been hugely positive with global travel cut to its lowest levels for years... >>>