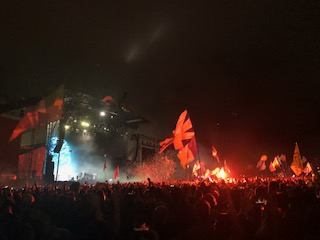 Glastonbury Festival 2019 Rocked! And what’s in store for Glastonbury 2020?

Here’s a follow up to my recent blog post that I did in the run up to Glastonbury Festival. Well what a year! It was a scorcher in more ways than one! Stormzy ruled the Pyramid on Friday, The Killers stole Saturday night, Miley Cyrus unexpectedly was the most memorable stand-out act for me! I’m not even a fan but my children are! The Beckhams turned up again and watched The Charlatans on stage apparently before being pictured at the exclusive Park Bar the following night ‘smooching’! It was star studded and rocked and rolled like never before with perfect weather, could it be getting better every year?

I’m still feeling pangs of FOMO I missed it … why?? I didn’t even do anything when he was on other than hang out at the Park Bar. It’s my major Glastonbury 2019 regret. I heard it was awesome, it looked incredible from the photos, I love Stormzy, why did I miss him? I can’t even bring myself to watch any footage because I know I missed out there, I was stupid! I vow not to miss any big acts again. Will Stormzy play Glastonbury 2020? I hope so!

The Killers at Glastonbury 2019

Another regret but not as big as Stormzy, I chose Chemical Brothers over The Killers. I saw the Killers at Glastonbury 2017 and they were awesome. I decided to see The Chemical Brothers, a joint favourite of mine and an act I haven’t seen for a while. Big mistake. The Killers smashed it, The Chemical Brothers were good but not amazing. Johnny Mar even got on stage with The Killers! I have seen him twice this year, once at All Points East Festival and on Saturday Afternoon at Glastonbury, he’s amazing too. We saw Liam Gallagher perform too, he was amazing! He played loads of Oasis songs (pictured below on the Pyramid Stage on Saturday). 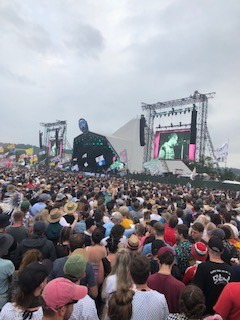 After The Chems we then ran up to The Park to catch the end of Hot Chip who were good, standard. Before hitting The Park Bar where we were only metres away from The Beckhams.

Kylie’s a star and she was the Sunday afternoon act which always pulls the crowds and the atmosphere and boy did she pull the crowds! I have been going for about 24 years and this was definitely one of the biggest crowds I have ever seen!

Chris Martin (from Coldplay) came on stage and did an acoustic duet of the lalala song with Kylie. When Kylie had to pull out in 2005 Coldplay played, hence the link. It was a touching tribute (although I saw Coldplay in 2005 and they excited me much more than Kylie ever could). Let’s be honest Kylie’s lovely but she’s not a favourite among MUSOs (not that I’m a MUSO unfortunately). However, her performance with Chris Martin and then later with Nick Cave who came on a did a duet with her for the ‘Where the Wild Roses Grow’ meant her performance was pretty awesome and worthy of the Sunday afternoon slot. Kylie pictured on the Pyramid Stage at Glastonbury 2019. 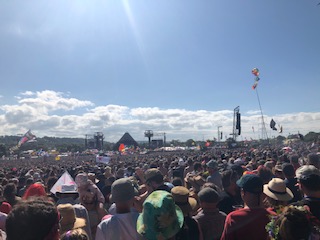 WOW! He made an appearance between Kylie and Miley and I have never seen an atmosphere like it, everyone went quiet and listened to him. I got goose bumps! He thanked the crowd for cutting back on plastic and said his Blue Planet Series 2 had a huge impact on plastics in the ocean.

“Now this great festival has gone plastic-free,” he said. “That is more than a million bottles of water have not been drunk by you in plastic. Thank you! Thank you!

I am so pleased we got to see him, he made an unscheduled appearance which I only found out about minutes before he came on and luckily was in the right place at the right time. David Attenborough pictured on The Pyramid Stage at Glastonbury 2019: 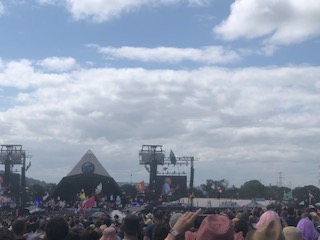 And then came Mylie! WOW! I wasn’t expecting that. I am not a fan but boy can she perform? And maybe I am a fan now!! Miley is known for being a Disney child star which for me got in the way of any talent she may or may not have. I was wrong, she is a powerful woman with an amazing talent to sing, perform, mesmerise and wow the crowds!

Presumably in tribute to her Godmother Dolly Parton who played about 3 or 4 years ago she sang ‘Jolene’ she covered Amy Winehouse Back to Black very touchingly too. The best bit for us was when her dad Billy Ray Cyrus and rapper Lil Nas X hit the stage to perform ‘Old Town Road’ with her! Wow! Our boys favourite song!

There was way too much swearing for 5pm but I’ll let her off on this occasion, she certainly made up for it in other ways despite loads of kids (including my own) being in the crowd!

Well done Miley you totally smashed it and we will never forget it!

So what is planned for Glastonbury 2020? Well it’s the 50th so tickets are going to be even more in demand if that’s even possible! However, Glastonbury Festival could get more tickets to sell next year as the council has apparently given the go ahead for a further 7,000 revellers to attend which means 210,000 tickets could go on sale this October.

When does Glastonbury 2020 take place?

The next festival will take place between June 24th and June 28th 2020, and it is expected that the general ticket sale will take place in October 2019, with another ticket resale in spring 2020. Sunday tickets usually go on sale late in the year and are available to locals only.

It’s that time of year again – Summer festival season! If you missed Glastonbury firstly bad luck, but don’t worry! There are heaps of festivals over the summer and here’s some festival fashion tips for you with some great deals and savings. To view all voucher codes, deals, offers and the latest retailer sales click here to go through to the homepage and navigate to your favourite brand or category.

Coming up with an outfit for a festival these days with so many different choices out there and hardly any room in your tent or bag can be a bit overwhelming especially if it rains (wellies weigh a lot as do wet clothes!). One of my biggest tips is to pack light, you will have to wear the same clothes or kill yourself with a heavy bag – get over it! It’s the lesser of two evils! Just get on with it, everyone’s in the same boat.

This summer’s all about breezy midi dresses and floaty skirts, tops with milkmaid sleeves, playsuits, denim jumpsuits, revealing tops which are perfect if you’re going in a heat wave and sneakers! And don’t forget your bum bag, convenient and all the rage! Go for 80s style. Here are our top festival clothes and accessories offers:

Converse Sale – Converse have some great sale items, be quick though! They are going quick! Converse sneakers are great for walking around at festivals, they’re comfy and look great! Plus do you remember a time when Converse weren’t in fashion?

Boohoo Festival Accessories and Sale - Boohoo have some great inspirational festival necessities on their festival page, click here to go through to their site. And while you’re there make sure you check out their amazing sale!

I Saw It First Sale – I Saw It Firsts Sale have some festival worthy jumpsuits and playsuits, they’re going fast so jump in quick before they go! 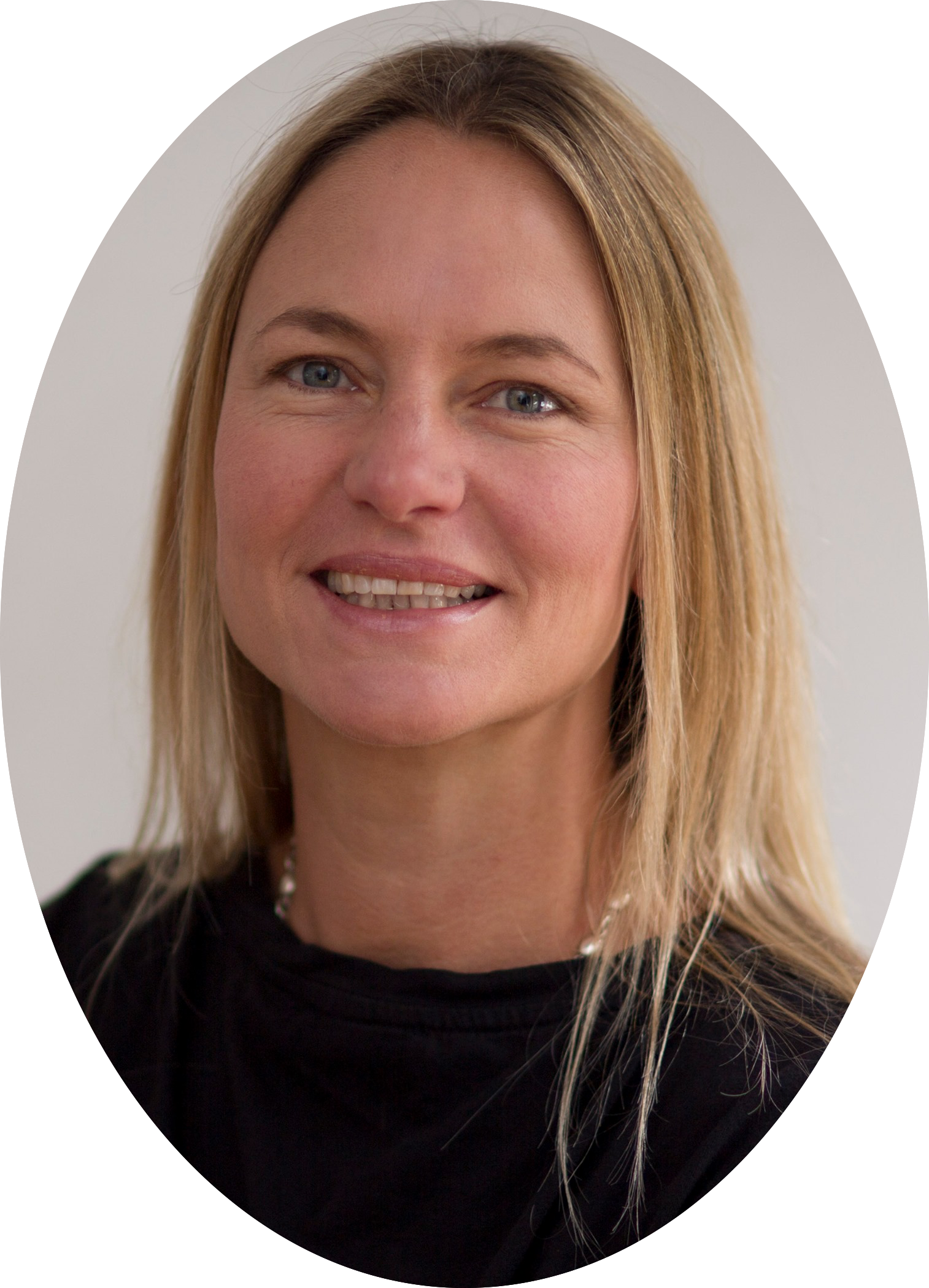 Miranda Coombes, mother of 2, passionate about the environment,

What is the line-up for Glastonbury Festival 2019 and Other Questions you will be Asking About the Worlds’ Biggest Greenfield Festival which lands in Blighty tomorrow bang on Que for a Mini Heat Wave! Boom!

Glastonbury Festival is THE Mother of all festivals!>>>